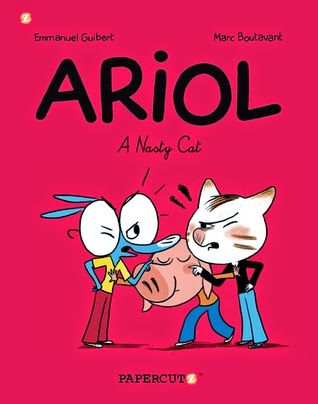 Ariol #6: A Nasty Cat by Emmanuel Guibert
My rating: 5 of 5 stars

The sixth volume of stories about Ariol and his anthropomorphic school pals. Just as adorable and full of fun as fans of Ariol and his best friend pig, Ramano have come to expect. The title refers to a cat character, Timberwolf, who is a bit of a bully with a nasty attitude but he doesn't appear all that much. Great fun stories with appearances by pretty much everyone we've ever met in the series plus some new characters. Not a big review because the book is just what I expect from Ariol and another delight to have read. Look forward to the next one which is going to be one big long story instead of the usual collection of shorts!!