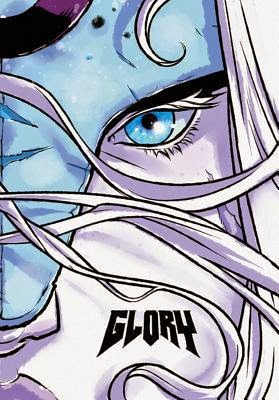 Glory: The Complete Saga  by Joe Keatinge . Illus. by Ross Campbell
My rating: 4 of 5 stars

A major intense epic saga of a female warrior. A gripping action-packed drama that kept me glued to the over 300 pages not being able to put it down. This has everything you could want in a superhero story: strong female characters, lots of gory violence, space adventures, demons, aliens, then add in sibling warrior rivalry and a lesbian love story to top off the plot. Gloriana (Glory) is unlike any female warrior/superhero character I know about. She is a female Hulk with the exotic background of Wonder Woman. Glory is a Beast of a woman, pure trained warrior, part Thulian, part Demon, she is massive, humungously tall and ginormously muscular. In certain scenes she appears like a bodybuilder, yet at other times she can appear obese, however she has a feminine face with eyes that show the feelings her body gestures cannot. Glory is not a completely likable character as she is a trained killer who, when she loses her temper, goes off into Berserker mode, but she has good intentions, however misguided and as a reader I felt for her. The ending was especially well-done giving redemption to the characters who most needed it. What a ride!