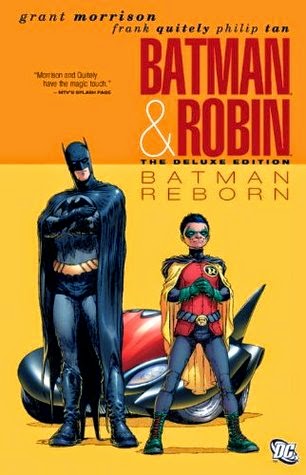 Batman and Robin, Vol. 1: Batman Reborn by Grant Morrison
My rating: 3 of 5 stars

I continue to explore the more recent pre-52 Bat-verse. Here we have the first collection of the teaming-up of Dick Grayson as The Batman and Damian Wayne as Robin. Bruce Wayne is supposed to be dead, but those close to him know he isn't really; me, I haven't a clue on that storyline. Anyway, this collection is divided into two separate story arcs, the second develops from the first. I loved the first one, introducing the new Batman and Robin. This is their first time, finally back in action as a team after Batman has been MIA for several months. They meet up with an awesome villain, Professor Pyg, who turns people into dolls, pretty gruesome stuff. Dick is different than I know him in the new-52, and this is only the second time I've read him as Batman but I'm getting used to him as a tougher, no nonsense, killer Batman. I hate Damian as Robin, a 10yo with major villain attitude. Second story features Red Hood, who was a completely new character to me in the new 52 and I haven't read him enough yet to get a feel for him there. But this is his first appearance pre-52 as a crime-fighter in Gotham and he is evil! I can't stand him, nor his "Scarlett" sidekick. What is with the weird capsule helmet he wears? His 52 outfit is much more cool. Anyway I didn't like the second story which just had Red Hood out against the bad guys, vigilante style, but waaaaay more vigilante and rogue than Batman ever could be. But Red Hood is also against the police and Batman. Really, just about anybody who doesn't tow his certain type of "the punishment should fit the crime" type of justice. The villain in this story is a strange motorcycle dude in pink called the Flamingo, who eats the faces off people. Since I love Dick Grayson I'm appreciating his role here and getting to know his character better and I liked the first half of this volume storywise very well. I didn't like the other characters nor the Red Hood story at all!