For the next little while my focus here will be to get up-to-date with the New 52 Justice League books I currently own along with some series featuring specific Justice League members.  I also have some kids' DC Comics that I'll be reviewing in amongst those as well.  So get ready for a stream of DC reviews over the next weeks. 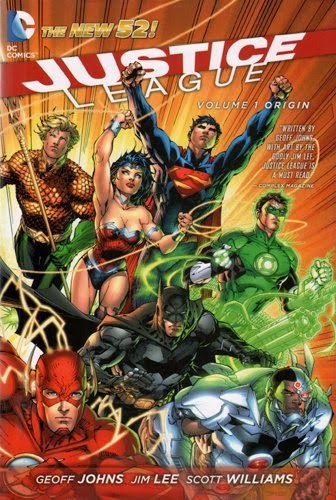 "In a universe where Super Heroes are strange and new, Batman has discovered a dark evil that requires him to unite the World Greatest Heroes! Superman, Batman, Wonder Woman, Green Lantern, Aquaman, The Flash and Cyborg unite for the first time to form the JUSTICE LEAGUE! Don't miss the thrill-a-minute hardcover collecting the first six issues of the best selling comic!"

Not really a review as this is a re-read for me as I embark on reading the Justice League series from the New 52.  Last time I read this was an e-galley from Edelweiss, but I enjoyed it so much I bought myself a copy and with this reread enjoyed all the extra back matter missing from the egalley.  My first read through I was interested in the Batman aspect and got caught up in the plot and the Cyborg's creation story.  So this time I decided to pay more attention to the other characters and see if my opinion on them changes.  The only one, I had been wanting to read earlier was Aquaman.  Reading through this time I liked the camaraderie between Green Lantern and Flash and I do want to read Flash.  GL is such a complicated character and he's never appealed to me, but I feel a little warmer towards him now.  So a great read, even the second time, where I think I picked up on much more than I did the first time through.  Read my original review here. 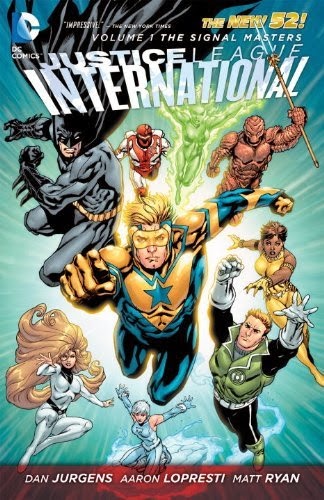 "In this title collecting the first six issues of the DC Comics – The New 52 series, the United Nations brings together Batman, Booster Gold, Green Lantern Guy Gardner, August General in Iron, Fire, Ice, Vixen and Rocket Red to form a new group called Justice League International! With the growing presence of super beings around the world, the JLI are charged with promoting unity and trust. But can they discover the mystery behind the giant alien Signalmen who are appearing all over the globe without killing each other first?"

This was cancelled after the second volume and I can understand why.  My first impression was that the art was pretty lack-lustre; then the members of JLI were introduced and (besides Batman) the only one I knew was Booster Gold, though not very well.  I found the first two issues pretty boring, none of the characters made any kind of impression on me except Booster and I have to admit the stereotypical Russian-ness of Rocket Red did endear him to me as the book went on.  The plot picked up in issue three and got better as the book went on, culminating in a tragic ending leaving us with the possibility that one or many of the members may have been killed.  I have the second volume so will read that, but unless any of these characters show up later on in the New 52 universe, it's hardly worth reading.  Not bad, but not good either. 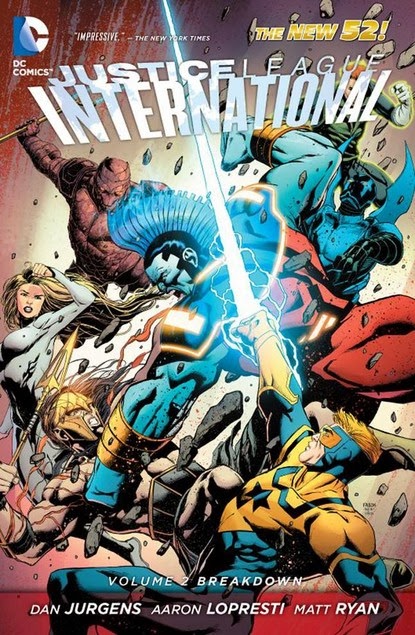 "The plan was for the JLI was to be Earth’s official protectors. But once Breakdown and the Burners attacked, that all came to a swift end.

Really happy with this one but am glad I knew it had been cancelled before I started or I would have been upset.  While I'd heard of Booster Gold he was a new character for me and I really like him.  Four new superheroes are added to the team whom I also had never heard of except one, though I know nothing about any of them and this one volume certainly wasn't enough to form an opinion on them yet.  Blue Beetle, Olympian, Batwing and O.M.A.C. are the new guys.  For most of the book they are fighting a team of bad guys who are really cool, especially the leader, Breakdown.  I really enjoyed this story, though I did get pretty confused with the "Fury of Firestorm" crossover issue as I was once again in totally new waters with the character.  There was a final ending of sorts that laid this chapter of JLI to rest but these guys are not down for the count.  At the very end Booster Gold is visited by his future self and told to visit the JLA and talk to Steve Trevor.  Now JLI may be at an end but the stoy has been tied into the whole Justice League universe and I'm hoping to see some of these guys again.
Labels: 2012 2013 3* 4* 5* DC Comics graphic novel superheroes