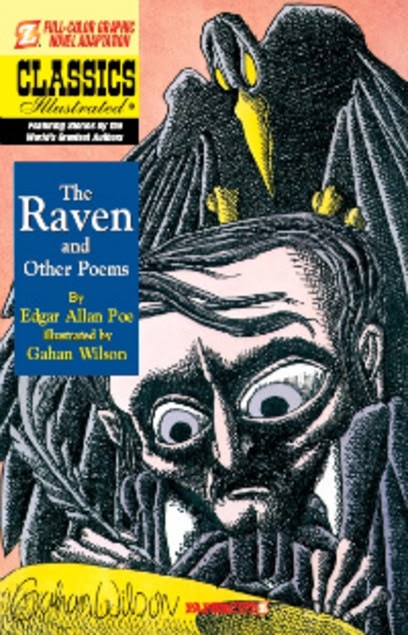 46. The Raven and Other Poems by Edgar Allen Poe.  Illustrated by Gahan Wilson (buy)
Classics Illustrated, #4

"The Raven, Annabel Lee, Eldorado, The Sleeper, The Haunted Palace, The Conqueror Worm, the City in the Sea. These are some of the world’s most fascinating, best-loved poems. Edgar Allan Poe’s verses – masterpieces of mystery, horror, melancholy, and haunting melody – grip the imagination and fuel the emotions. World-famous cartoonist Gahan Wilson, whose work finds the eerie in the most common of situations, brings the perfect, surreal touch to Poe’s elegantly dark poems."

I love Poe's stories and I love three of his poems: The Raven, Annabel Lee and The Bells.  I kind of like Eldorado.  I was disappointed to find that The Bells was not included in this poetry collection, but not surprised as it was omitted from the last graphic compilation I read too.  I wonder why it's not as popular as I'd like?  Hmmmm.  The poems here are Poe's original text.  They are written in a slightly larger than normal font, with double spaced lines and the type is bolded making it feel more accessible to younger readers.  Also many pages have only one or two stanzas so as not to overwhelm with pages of full text.  I've always loved Gahan's illustrations ever since I came across a wonderful book when I was very young called "Harry and the Sea Serpent".  I was more than pleased with his combination of creepy but cartoony illustrations.  The selection of poems was less pleasing; other than the first three listed below that I knew (mentioned above) i hadn't read (or more likely did but don't remember) any of the others and they didn't do anything for me.  Included are: 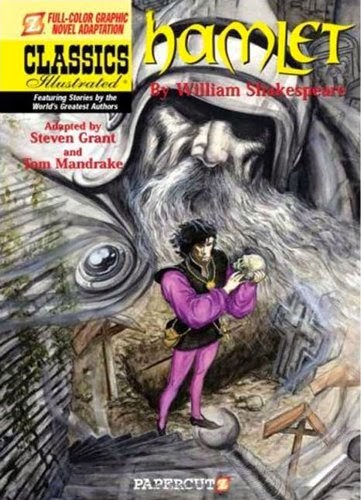 "William Shakespeare’s Hamlet is one of the most revered and loved plays of all time. The story of a young man who strives to avenge his father’s death has been performed and read constantly ever since it debuted at London’s Globe Theatre over four hundred years ago. Madness, family, and revenge are only a handful of universal themes found in this tale that still hold great meaning to us today. Tom Mandrake’s art combined with Steven Grant’s adaptation truly realizes the dark nature of this story. Each character from Laertes to Rosencrantz and Guildenstern is recreated in this adaptation in a unique form, making it a wonderful graphic novel for readers old and young alike."

Hamlet is my favourite Shakespeare, and probably why I now love good books where everybody dies at the end.  I enjoyed Mandrake's art here very much.  It's very rich and full, filling the entire page and suits the atmosphere; the lines have an ethereal curvature to them lending to the ghostly theme.  When I started to read I was surprised to find that this adaption consists of actual Shakespearean text; I don't know why.  I shouldn't have been, since Papercutz has proven itself to be very committed to preserving the content of the original books they are presenting in this series.  I'm an odd duck, though, and think Shakespeare is best read by the masses, unless you are a scholar or poetry freak, in ordinary English.  I enjoy the plays in the original vernacular because, well, plays are meant to be heard/watched not read.  That's just how I am.  Back to the book.  If you want an original text adaptation this is very good, all the famous quotes are here and the story hasn't been watered down.  All the racy bits are here too.  But most children won't understand most of the language as there are no footnotes to explain the abundance of 16th century vocabulary.  However, they'll get the gist of what is going on by putting the phrases together with the pictures and multiple reads will further expand the enjoyment.