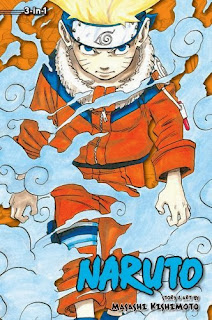 "This Chakra-Powered Omnibus Contains Volumes 1, 2 and 3 of Naruto!

No one takes Naruto seriously at Ninja Academy. Especially not the other students, who all are competing to be the best ninja ever and someday lead Konoha, the Village Hidden in the Leaves. Naruto and his classmates are about to embark on an adventure that takes them far beyond Ninja Academy, beyond Konoha, beyond anything they ever imagined. What is Naruto’s true destiny? The epic story that has sold millions worldwide begins now!."

Purchased a copy from a local retail store.

Since this is in Shonen Jump, my son asked for the first volumes and he got this for his birthday last year.  I try to read what he reads so we can talk about it and I want to be versed in the popular titles.  This series started way back in the golden age of the '90s so has a lot of typical manga elements from that period.  Exaggerated emotions, especially.  This used to bother me, but I've read so much now, that I find it fun and nostalgic to read '90s stuff.  This omnibus contains Vol. 1: Uzumaki Naruto, Vol. 2: The Worst Client, and Vol. 3: Dreams.  I was in love with the book by the end of the first volume as  I took to the characters right away and this ninja title hadn't been anything like I thought it would be.  The three main characters are great, even though each has a stereotypical type.  Throughout the three volumes Naruto changes the most.  He starts off as an immature kid, annoying at times, just wanting and assuming he will be the best, biggest hero ever by the end of his training.  Well, during the next two volumes, he gets a dose of reality and matures quite a lot that as we enter Vol. 4 we are going to find a different Naruto.  The plot revolves around their training to become ninjas, which they complete and then their special training under a master and they begin going out on missions with him while being trained in high level ninja arts at the same time.  They've taken a mission to protect a man as he goes home but find that he hasn't told them the whole truth and that a mafia type guy is really after him.  Battles ensue.  Sasuke's character's background is revealed and some of the mystery about him is lifted.  Now the ninjas find out that other assassins have been sent out to kill them (or is it just their master).  Battling with a super cool Ninja, Zabuza, is great stuff.  I liked this beginning very much. The plot is simple and easy to understand; the characters are likable; the villains fun; and good humour for an all around enjoyable entertaining read.
Labels: 1999 2011 5* manga martial arts ninja shounen sports viz media