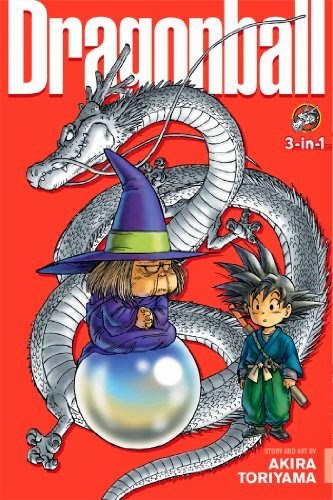 "The World’s Most Evil Crime Organization
You do not want to mess with the Red Ribbon Army. To get what they want, they’ll sic you with scary thugs, machine-gun fire and even torpedoes! Only Son Goku would think nothing of challenging this evil crime organization—anything to get back the one Dragon Ball his grandfather gave him.
As the Red Ribbon Army closes in on Goku and his friends, Goku must face an array of opponents while preventing all seven Dragon Balls from falling into evil hands. First, there’s cruel General Blue, who has a mysterious power up his sleeve. Then there’s master assassin Taopaipai, so strong that Goku’s blasts barely faze him. But neither of these opponents compare to the masked challenger Goku faces at Baba Uranai’s—he’ll give Goku the shock of his life!"

Vol. 7: General Blue and the Pirate Treasure:  Son Goku, how many ways do I love thee?  Heehee.  I have so much fun reading Dragon ball, I feel like a kid!!  All the usual stuff here: humour, action, battle, escapades.  The Red Ribbon Army is still after our friends trying to get their dragon balls and the dragon radar.  General Blue goes after them personally here and ends up physically fed up with Goku.  The best parts of this volume were the interactions between Blue and our heroes.  Not only do our friends retrieve another dragon ball (making 5/7) they stumble upon Pirate Treasure.  By the end Goku is separated from the others and off to find the next Dragon Ball on his own. (5/5)

Vol. 8: Taopaipai and Master Karin - Oh boy, this was a great volume!  The plot is really getting good now.  Things with the Red Ribbon Army get really intense and there is a lot of dying in the battles this time around.  I'm quite sad actually because someone I like dies, without much fanfare, and I was shocked!  I actually still can't believe it's real, thinking it will turn out not to be true but someone has effectively taken that person's role, so to speak.  Yes, I'm being cryptic on purpose :-)   Goku has never had a wish for the Dragon balls up to this point but in this volume he finally finds a wish worth wishing for. (5/5)

Vol. 9: Test of the All-Seeing Crone:  This could be called a segue volume as the story switches from the last story arc to a new one.  So while the end of this volume sets the scene for the next villains, the majority of this one takes our heroes on a sidetrip to visit the crone where, guess what?, they are tested and engaged in battle!  This is a really fun episode and has our guys battling a series of of "monsters" from classic horror films starting with Dracula.  There is a lot of good humour, as the last volume was pretty intense, making this light-hearted and fun and the stage is set for the next story arc as we finish the book. (4/5)
Labels: 2013 5* fantasy manga martial arts MG shounen T viz media YA