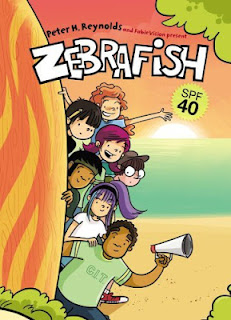 "Zebrafish has disbanded, at least for the summer, but the ex-band members can still improve the world in their own way. Vita is figuring out how to channel her lazy summer into something positive (with her dog Chimp’s help, of course). Walt and Jay convert an old ice cream truck into an awesomely painted (and fully wired) book mobile. And Plinko and Tanya inspire their campers at Stickleback Arts Camp to seize the day—Tanya takes a special interest in a camper with diabetes who’d rather hang out in the infirmary than participate in camp, while Plinko is preoccupied with his night vision goggles (leading campers to the bathroom night or day!).

Ideally Zebrafish will reunite for the end of summer Strings of Fury concert at the Dunes, but there’s a hitch—Vita refuses to play plastic. This follow-up collaboration between FableVision and Children’s Hospital Boston is as rockin’ as the first."

I read the first Zebrafish book and while it didn't particularly grab me, I saw some potential so was pleasantly surprised to see this sequel come up three whole years later.  Would it be three times better?  Hardly.  However, I thought it was a fairly well done story along the same vein as the first one.  Teens learning to deal with being teens and added issues including one medical-related.  The character from the first book is back but in remission and this time in the medical hut at summer camp she meets a diabetic boy who wears a pump of insulin on his stomach which he controls with a remote device and caries around in a fanny pack.  These issues are added to the everyday camp issues of being councilors-in-training, summer jobs with the bookmobile, creating spoon art sculptures, saving wildlife from traps and eventually gaining a new member for their band.  A quick easy-breezy read.  Middle graders should identify, but the characters don't go beneath the surface and too much stuff was happening that I couldn't really care about any one issue/event enough.
Labels: 2013 3* Atheneum Books graphic novel MG realistic fiction