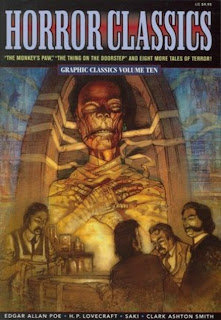 Fantastic collection of popular and not so well-known horror tales from the 1800s.  Starting with a wonderful tale from Lovecraft "The Thing on the Doorstep", my favourite in the entire collection. Michael Manning's art was superb and for some reason his portrayal of the main character really captured me.  I have to say I've only read Lovecraft in anthologies and so far to date have not had any luck with him but this tale has made me see why he is so beloved by many.  A brilliant story wonderfully adapted in graphic form here. I enjoyed every tale in this collection and there was just the right combination of scary vs ironic.  The art was all perfect for the stories they portrayed and I even got along well with Milton Knight's offering, who I am beginning to appreciate more than I have in the past :-) Familiar to me were Poe's "Some Word's With a Mummy", Jacob's "The Monkey's Paw, Saki's satirical "The Open Window" and London's haunting "Keesh, son of Keesh".  Of the others I was unfamiliar with I was delighted with Antonella Caputo & Nick Miller's rendition of Bret Harte's Selina Sedilia.  Altogether 11 stories and 1 poem make one of my favourite themed collections in this series.
Labels: 2004 5* anthology classics eureka productions horror short stories