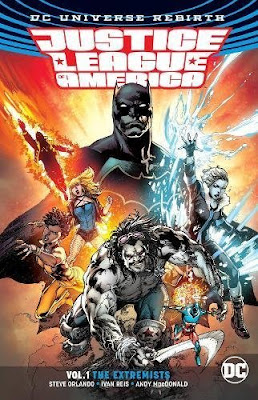 Justice League of America (Rebirth) Volume 1: The Extremists by Steve Orlando
My rating: 4 of 5 stars

I'm a big fan of superhero teams and Justice League in particular. In all its various incarnations. My favourites so far are the classic JL with all the big names and Justice League Dark was pretty cool and different. This new Rebirth JLA team is also different. Very different. Batman is the leader and he's put together a team of heroes and former Suicide Squad members. Condition to be in the League is one must have been born human, but then there's Lobo. This volume contains two complete stories of dictators the JLA puts out of business. The Extremists have come to Earth after accidentally blowing up their own planet. Now they plan on "saving" Earth from itself by basically killing all humans. The last two issues are a story in which a US town has been taken over by a Roman type of leader. It takes some getting used to this new team and its dynamics but by the end, I'd become involved.

What do you think of who's been put into this new team?