The Seven Deadly Sins, Vol. 10: The Painful Wrath of the Fairy King by Nakaba Suzuki 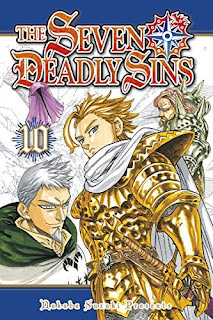 The Seven Deadly Sins, Vol. 10: The Painful Wrath of the Fairy King

by Nakaba Suzuki
My rating: 3 of 5 stars

A lot of action I admit got a bit confusing for me. Poor Dianne is being attacked at the beginning and all are coming to her rescue. But then a weird series of events where Diane is a child. Never quite sure if this was a flashback (no black borders) or a dream (seems to be real, though) this part's weird. Then the action picks up and makes sense as the focus is back on saving Princess Elizabeth from her kidnappers whose evil plot is now revealed. I'm getting tired of the rescue-Elizabeth arc and would like the seventh sin to be found and join the group as we still only have six. Not the best volume, but picked up from the last and ends with a huge doozy cliffhanger!