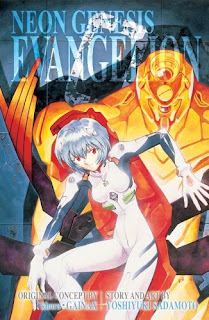 "Once Shinji didn’t care about anything; then he found people to fight for—only to learn that he couldn’t protect them, or keep those he let into his heart from going away. As mankind tilts on the brink of the apocalyptic Third Impact, human feelings are fault lines leading to destruction and just maybe, redemption and rebirth."

Vol. 4 - A new member is brought in to pilot Eva 3, Asuka from Germany. And wow, does she ever have a chip on her shoulder!  She comes in with major attitude, all bossy and mean.  She and Shinji fight an Angel and lose.  When it is discovered that the Angel works in harmony with itself when split in two Asuka and Shinji have to live together and learn to work in tandem in five days.  Needless to say this causes a lot of tension.  Along with Shinji came a man who was a former lover of Misato's and there is some character development there along with some storyline.  Great battle scene at the end.  Absolutely loving this series!! (5/5)

Vol. 5 - Oh man, this is getting so good!  Asuka moves in with Misato and Shinji, lots of fun comic stuff there.  More serious stuff in the relationships between Shinji and Ayanami and Shinji and his dad.  The plot thickens as we learn there is an enemy within Nerv itself and Mr. Kaji's secret is found out.  He then lets Misato and Shinji in on a creepy secret and tells Shinji some secrets about Nerv, his dad and his dead mother.  A great battle in the middle as some freaky giant eye thing attacks the city.  Story ends with a stunning visual.  Loving both the plot and the characters!  (5/5)

Vol. 6 - Wow, wow.  Totally emotional, intense volume.  The intrigue gets deeper with the corporation.  At this point it's looking like Shinji's dad is a bad guy.  He's appeared that way from the beginning, but he just keeps getting worse and worse!  There is something really weird we are going to find out about his mom too, I'm sure as he keeps remembering his past.  But wow this volume concentrates on the new 4th pilot and the battle is extremely intense, the whole storyline is unexpected and emotional.  I really can't believe this happened!  The best volume to date and worthy of a 6.  (5/5)
Labels: 2013 5* manga post-apocalyptic robots science fiction viz media YA