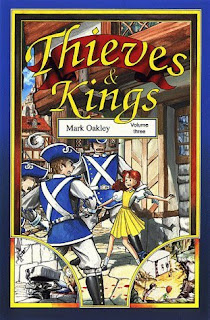 "From the dream garden of the Sleeping Dragon, to the tower of the Lost Wizard, the thief Rubel and young Heath make their way. The third volume of Thieves & Kings collects eight issues of the original comic book series into one story, focusing on Heath's journey to find a new home, to explore her calling as sorceress and uncover the riddles of magic.

The Blue Book brings to an explosive close the first third of Thieves & Kings, and sets the stage for the next story arc entitled, The Queen of the Trolls."


The third book in this unique text/graphic novel combo continues in just as exciting form as the previous two books.  The story focuses mainly on sorceress-in-training Heath, including also, the young thief Rubel, accompanied by the imp Varkias.  Of course the bad guys show up but the princess and wizard are only spoken of in this volume.  The story becomes much more involved and layered at this point bringing in many side stories and the world building is intricate spanning thousands of years as time travel, magic and reincarnation give many characters a history which is proving deeply satisfying.  This series is one of my best finds this year and I am greatly enjoying it. This volume really brings the story to a much deeper level and finishes on a note of great anticipation.  The author includes a brief endnote giving us an expectation as to where the story will be proceeding from this point leaving me virtually panting to get my hands on the next volume.  Looking for a new quest fantasy series?  I'm highly recommending you look no further.